The Cycle of Life

IN THE VIETNAMESE CITY OF SAIGON, TWO STRANGERS SHARE A RIDE THROUGH UNSPOKEN TERRAIN 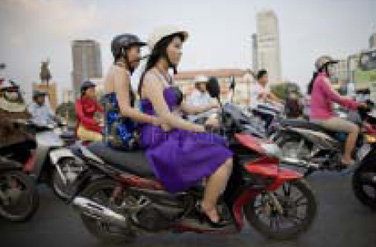 “No thanks.” I pick up my pace. He gives his moto some gas and stays right with me.

“No,” I scoff and try not to be flattered.

“We see all Saigon.

“You decide.” He pats the seat behind him and smiles—his teeth are crooked, rotting. They make him look older than his early 20-something years.

I offer $5; the young man shrugs. I climb on the back of the Honda scooter. Even before I can get my hands on his shoulders, we’re ripping through the city, barreling down wide boulevards, and leaning hard into roundabouts left behind by the French. On the back of a speeding bike, I can’t help but feel the thrill of freedom.

The moto is the transportation of choice for the man (or woman) on the street in Ho Chi Minh City, which many people still call Saigon. A bride in a long white flowing gown roars by us, weaving through traffic, tap-tapping her horn, apparently late for a date. We pass a family of six riding on a scooter built for two, and see an old man transporting a dozen live roosters, talons tied together, wings flapping hard—they’re hanging upside down from a stick slung across the handlebars. I’m propositioned by several prostitutes gliding by in tight dresses. A few of them are women.

My driver says his name is Tuan. He’s shouting over his shoulder as we hurtle through the streets, telling me about his three brothers and three sisters, his mother. We circle past the opera house, and he blurts out something I can’t hear through the wind.

Turning his head from the road, he repeats, “My father die five month ago.”

“He speak good English than me.”

“No,” he laughs. “My father speak good English than me. He die five month ago.”

“I’m sorry,” I say, grateful for a second opportunity.

Tuan takes me to a temple. He sits cross-legged, shoes off, eyes closed, in front of a fat, golden Buddha. I envy his unapologetic faith and wonder if he’s thinking of his dad. We sit and have tea. He tells me his father had been jailed, unfairly, for six years. He tells me he has a girlfriend in Hue.

The second temple we visit does nothing for Tuan. He leaves his shoes on and keeps smoking. His slight frame leans in the doorway while he waits for me to wander through. He takes me to an aquarium I didn’t ask to see and stands trancelike in front of a large tank as a lone blacktip shark circles tirelessly. We walk for a long time through a formal garden, saying very little. The afternoon is hot and humid; it’s the end of the monsoon season. Many of the plants droop heavily. Our buoyant beginning has faded into a melancholy. Eventually he drops me back in front of my hotel. I take out the $5 we had settled upon.

“I take you good places, you pay more.” He stares at me. “You like garden? My mother like garden. My father ….” the rest of his thought is lost in the roar of Saigon traffic. I feel petty not handing him money that will do more for him than it will for me, but I feel played, and suddenly I’m angry. I glare back at him. A car horn blasts. I’m ashamed of my rage; it drops and I feel the hurt beneath it. I look away. His eyes fall to the pavement. We’re silent. I glance back at him. His gaze is unfocused now, off in the middle distance. I know his sense of drifting. I feel for his loss. For me, the memorable moments of travel aren’t solely about a playful surprise, or a happy coincidence, or a shared tenderness. Sometimes my roaming opens a portal that is painful, or conflicted, or even inscrutable. The full expanse of life.

“Here, Tuan.” I offer him two $10 bills. He glances at the money, then shifts his eyes to me. A lot passes in the look between us; our connection has become more complicated, and deeper. Without another word he takes the money and speeds off, swallowed back into the sea of Saigon’s nearly six million motos.